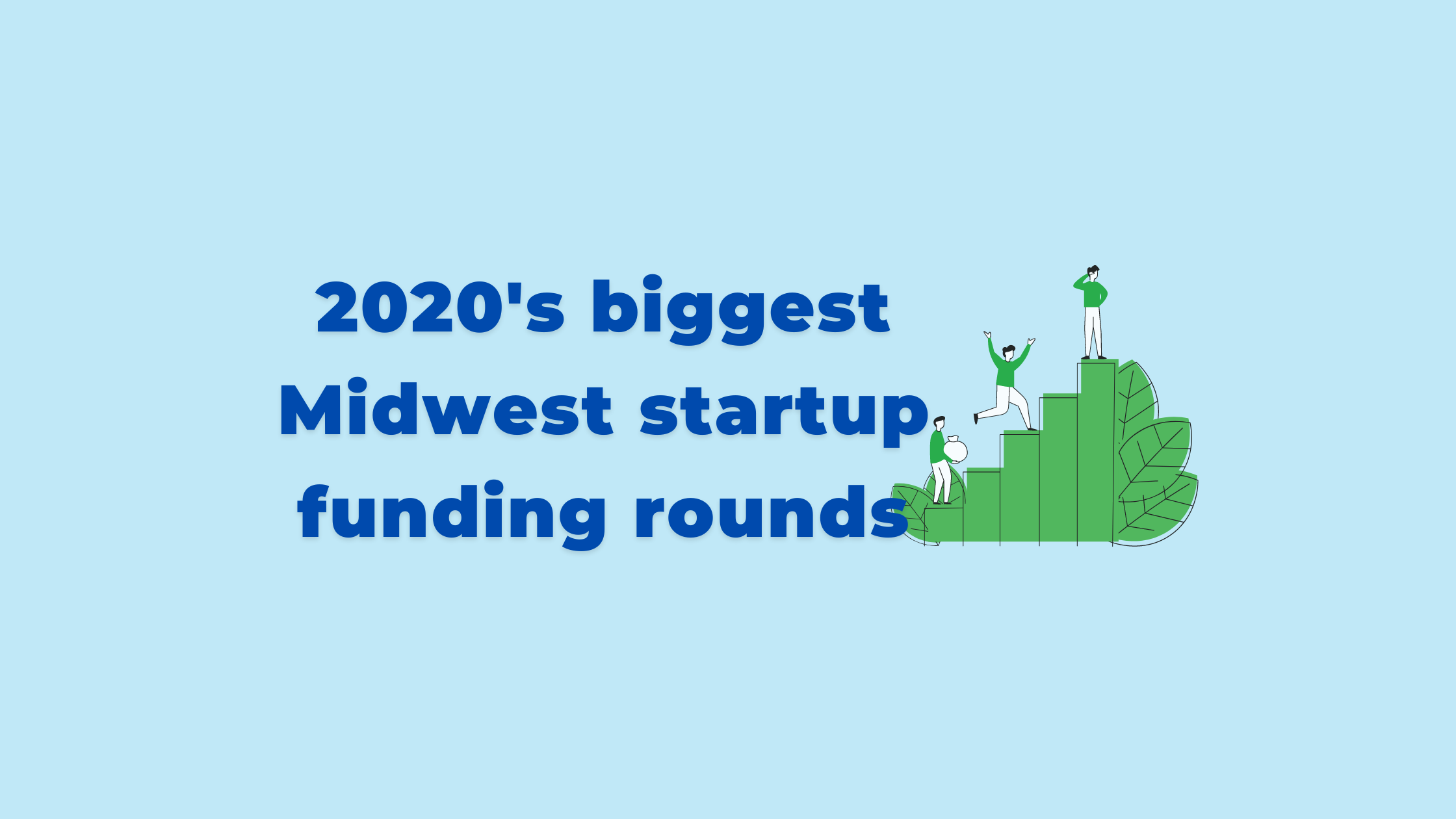 2020 certainly was a challenging year for startups across the board. And fundraising, though it fared better than many thought it would, was still no exception.

In Q2, the first full quarter in the pandemic, startups in the Great Lakes region saw an increase in deals from 2019, but a decrease in deal value. And in Q3, startup funding for female founders dropped to a three-year low.

Despite setbacks, many startups in the Midwest succeeded in completing funding rounds of all sizes. On top of that, some major Midwest startup companies went public, raising hundreds of millions in their IPO. Some startups acquired new companies, and others were acquired.

Plus, as companies shift their focus away from the coasts and begin to invest in the Midwest and the talent here, all of this goes to show that the Midwest startup and tech community is going strong.

Curious who brought in the most funding in 2020? Check out this year’s top funding activities for Midwest startups and tech companies. All the Midwest startups listed here raised over $10 million in 2020.

Rivian is a EV startup unicorn that has consistently raised big money since its founding, despite having yet to bring their product to market. They’re expected to be the first company to bring an all-electric pickup truck to market in 2021. Back in July, they raised $2.5 billion, with an estimated valuation at or above $8 billion.

Root Insurance is a top Columbus startup that offers behavior-based car insurance rates. This fall, Root went public, raising $724 million in their IPO. In 2019, the company was valued at over $3 billion. Now, after the IPO, which was the largest IPO in Ohio history, Root is valued at $6.7 billion.

Vroom is an ecommerce platform for buying and selling used cars. They have offices in Detroit as well as New York and Texas. This year, the company went public, raising $467.5 million in their IPO. This brought the company’s valuation up to $2.48 billion.

Olive is one of the biggest startups in Columbus and in 2020 has turned into a bit of a unicorn. They’ve had a major year in fundraising, closing a new round almost every quarter. In Q1 they raised $52 million, in Q3 they raised another $106 million, and in Q4 they raised a whopping $225.5 million. That’s a total of $383.5 million just this year. This brought their valuation up to $1.5 billion. And recently, it was announced that Olive acquired prior authorization AI company, Verata Health.

Located in Chicago, Tempus was founded by Groupon co-founder and Detroit-native Eric Lefkofsky. Tempus is a healthtech startup that really ended 2020 with a bang. Back in March they raised $100 million, and this month they raised another $200 million. This brought their total funding up to over $1 billion and their valuation up to $8.1 billion. It’s one of the top startups in the Midwest—and the U.S.

StockX is one of the biggest startups in Detroit. The online "stock market of things" has grown significantly over the last couple years. Q3 of this year was their first profitable quarter, and with a 75% year over year growth, their future is looking bright. The Detroit tech company just raised a fresh round of $275 million, which more than doubled their valuation from last year to $2.8 billion.

Interested in StockX jobs? Apply for StockX jobs with one free profile.

Amount is a top fintech startup that builds and enhances the digital credit offerings of financial institutions. Founded just last year, the company has already raised $139 million, with $81 million of that coming in just last month, and the other $58 million in March of 2020. This month, they were just given a valuation of $681 million.

Headquartered in Chicago, Clearcover is an insuretech startup for car insurance. At the beginning of the year, they raised $50 million in series C funding. They also opened a new (and right now virtual) office in Detroit, and their Detroit team is growing.

Interested in working at Clearcover? Join the purpose.jobs talent community. Create a free profile and start applying for startup jobs.

This year, Duolingo raised a total of $45 million over two funding rounds, in series G and series H rounds. Their total funding is up to $183.3 million, and the language-learning app is valued at $2.4 billion. Duolingo is a top Pittsburgh tech startup as well as a top startup in the U.S.

Back in January, Columbus startup Aver raised $27 million. This brought their funding up to $53.1 million. Aver is a value-based healthcare tech startup.

Located in Indianapolis, Scioto Biosciences is a biotech startup that’s advancing healing through microbiome therapeutics. Their total funding since the company started in 2017 is $31 million.

The Mom Project is a tech startup dedicated to helping working mothers re-enter and stay in the workforce. They do this by partnering with hiring companies that value flexibility and carving out a space for working moms. The Chicago startup, founded by one the Midwest’s top female founders Allison Robinson, raised $25 million this year. Their estimated valuation is between $100 million and $500 million.

Branch Financial, located in Columbus, did a bit of growing in 2020! Back in July, they closed on $24 million in Series A funding. They also announced that they’d be tripling their workforce in Columbus, adding 150 startup jobs.

Based in Columbus, READY Robotics creates software for industrial and collaborative robots. In Q1, the startup raised $23 million, bringing their funding up to $41.8 million. They’re one of the top startups in the Midwest.

When BoxCast was founded in 2013, people didn't really understand (or feel the need to do) livestreaming. Fast forward to 2020, and now everyone needs it. BoxCast is a Cleveland startup that makes livestreaming accessible to anyone. In December 2020, the company closed a $20 million Series A funding round.

Lessonly is an Indianapolis tech company—and a top startup in the U.S. This year, they raised $16.1 million, bringing their total funding up to $30.2 million. Their training and education platform has over 3 million users. If you want to learn more about Lessonly, check out our video of their CMO, Kyle Lacy, speaking at the State of the Midwest Startup Community 2020.

As part of the vibrant Ann Arbor/Detroit cybersecurity ecosystem, Censys is a top startup. They’re building the most reputable, exhaustive, and up-to-date source of Internet scan data in the world to help protect companies from cyber attacks. This year, they raised over $15 million.

Want to join a top startup in Ann Arbor like Censys? Join the purpose.jobs talent community to get connected with hiring startups.

Bloomscape is an online ecommerce platform for home plants, and they also provide the tools to take care of them. This year Bloomscape raised $15 million. On top of that, they acquired plant care app Vera.

ScriptDrop is a healthtech startup that connects patients, pharmacists, providers, and pharmaceutical manufacturers, making it easier for people to get their prescriptions. They’re a top Columbus startup, and this year they raised $15 million in Series A funding.

A top Midwest startup, Astronomer is a Cincinnati startup that’s building a top-notch data engineering platform. They raised $13.6 million back in May in Series A funding.

Located in Columbus, Finite State is a pioneering tech startup for supply chain security in IoT devices. This year, they broke out of stealth mode and raised $12.5 million in Series A funding.

Splash Financial is a Cleveland fintech startup that helps young professionals refinance their student loans and gain more financial freedom. Last May they raised $12.3 million in Series A funding.

Get hired at the best startups in Ann Arbor.

Columbus startup Aware is a comprehensive AI solution for governance, risk, compliance (GRC) and insights for leading digital collaboration technologies. This month, they just announced that they closed on a $12 million Series B equity investment.

Sharpen is a SaaS technology company in Indianapolis that’s improving customer service—for both customers and agents—through software. In September 2020, they closed a $12 million venture funding round, bringing their total funding up to $32.7 million.

ArborMetrix is creating software that tracks, measures, and analyzes the performance of healthcare outcomes. Just last month they raised $11.8 million.

Based in Columbus, PriorAuthNow is building the technology to help people create easy, automated prior authorization workflows for their users. In October, they raised $10 million in venture funding.

A few honorable mentions from other companies we 💙

*All funding data was pulled from Crunchbase. This post has been edited to include additional, new funding rounds.