Balance Your Earning Potential With Cost of Living 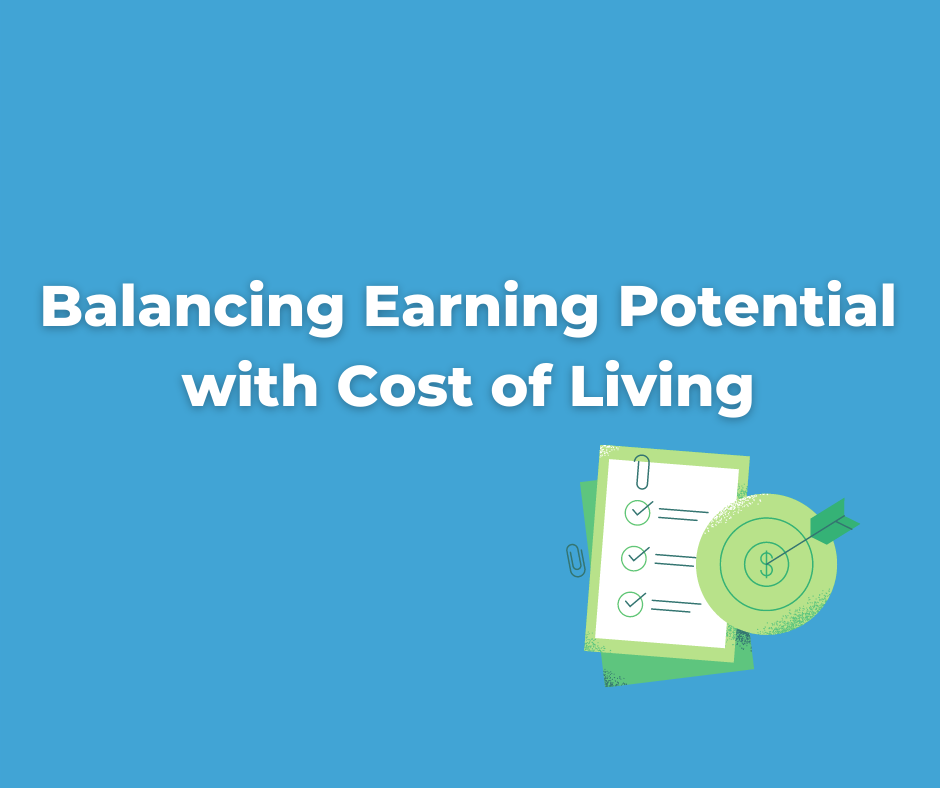 High growth tech jobs are popping up all around the country. You can find job boards with amazing careers in a number of places and career fairs with a variety of amazing companies. At first glance, it seems that many of the highest paying positions are based in areas like San Francisco and New York City. According to Glassdoor estimates, the average annual salary for a software engineer in those cities can be anywhere from $70,000-$150,000.

Salary, however, doesn’t tell the whole story. Factors like affordable housing, state and local taxes, as well as the general quality of life in a city have a huge influence on how tech professionals experience, live, and grow in a city. When adjusted for cost of living, a high salary can feel like much less.

Using the One America Works City Selector Tool, we compared salary potential with cost of living. The results show that the following list of cities strike the best balance between the two:

If you feel like each paycheck is never enough, it may have less to do with your actual earnings and more to do with where you live. Cities where your paycheck stretches the furthest may not be the ones you hear about often in the news, but they are the ones where investments like a house or a new business are much more attainable at the median income level. They may be places that are in the peripheries of the cities considered to be innovation hubs, or they may be cities like Atlanta, Austin and Chicago that have created growth and innovation in their own right and still maintain a relatively lower cost of living. Considered to be some of the fastest growing tech cities in the U.S., many underrated urban centers also tend to be the best cities for a quality of life higher than what you would get along the coasts.

What Makes a City Affordable?

The cost of housing depends largely on the decision to buy or rent. For a renter, the largest housing costs are rent, utilities and insurance. However, when buying, additional expenses like property taxes, homeowner’s association fees, and maintenance creep into the budget.

One of the largest factors influencing your ability to purchase a home rather than renting from someone else is your debt-to-income ratio. Because of this, cities with lower median home values ensure that your debt (in the form of a mortgage) is in a good ratio with your income. Dense coastal cities with high home values easily inhibit banks from lending to people even if they have a six-figure income simply due to the fact that the debt needed to buy a home is higher.

States with lower home values, property taxes and interest rates make it easier to borrow the money necessary to purchase a home. This means that not only does your paycheck go further, but your income can also create value much more easily in the form of equity. It’s no wonder that states like Texas, Tennessee and Illinois top the list of the overall cheapest places to live.

The second largest chunk of most paychecks goes towards expenses like food and transportation. Many of these expenses are important to calculating a city’s true cost of living. Typically, cost of goods make up almost a quarter of the entire household budget for average U.S. households.

At the city level, local income taxes can eat up a paycheck and increase the cost of living. Cities like Denver and Phoenix boast no local income tax and relatively low state income taxes. Austin, Dallas, Nashville have no state or city income tax. Rather, much of the tax state and local tax revenue is made up of property taxes.

To help balance your earning potential in certain cities against cost of living, use the city cost of living comparison features in the One America Works’ City Selector Tool. Here, you can discover potential locations based on what is important to you.

Ready to make a move? Find a job in one of the most affordable regions of the country.

About One America Works:

One America Works is a vision of the future where high-growth technology companies find the talent they need to grow and succeed in cities across America. Rather than bottlenecking the tech boom’s economic opportunity in just a few markets and imbalancing the nationwide talent pool, we believe the key to America’s economic future lies in diversifying its opportunities. By bringing investment and innovation to these communities, more people in more places will have access to the careers of the future and help contribute to the shared success of our economy.