Behind The Scenes With Detroit Unicorn StockX 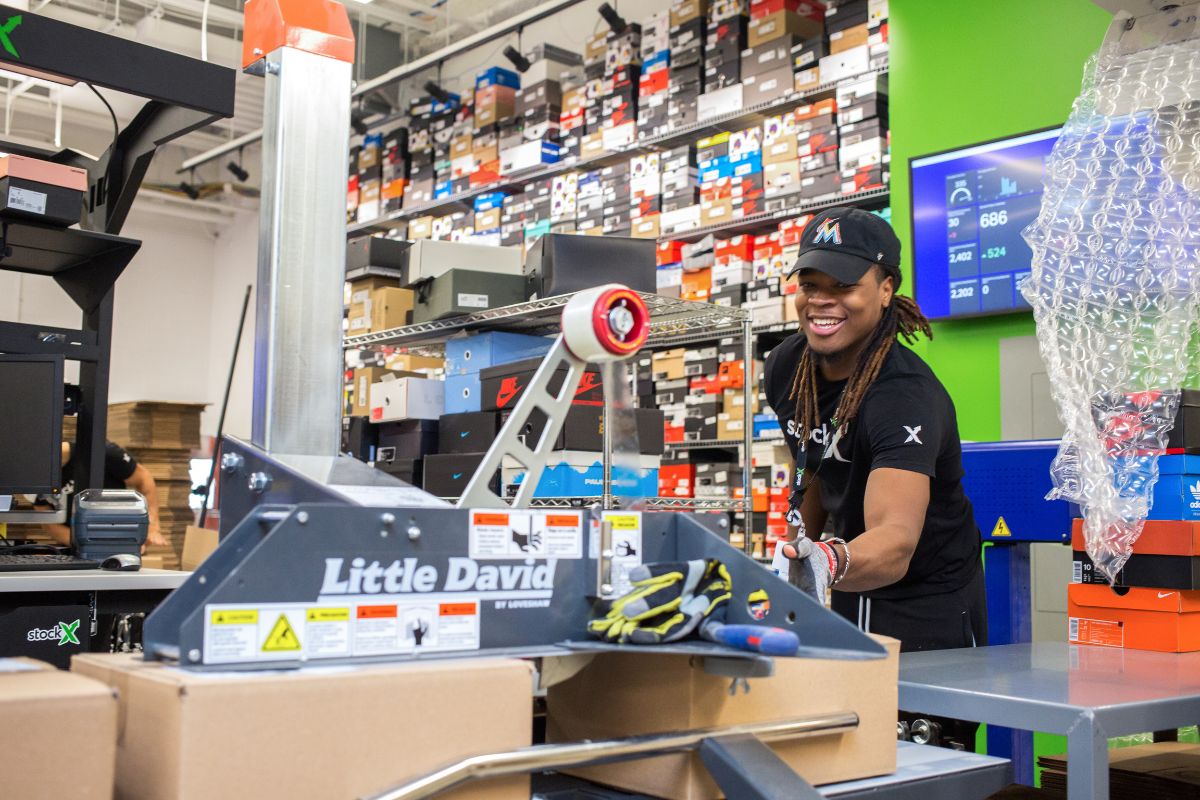 At StockX, culture is everything. Sure, its current culture marketplace hinges on it, but culture goes way beyond the product. It’s the technology, the people, and the mission.

Launched in 2016, Detroit-based startup StockX started as a sneaker resale platform and has quickly grown into a multi-category platform for sneakers, electronics, collectibles, apparel, and accessories.

The company has evolved from a six-person team in Detroit to a global company with customers in more than 200 countries and territories and over 1,500 team members around the world. With over 150,000 products in its catalog today, StockX is so much more than a place to buy and sell Air Jordans.

We sat down with two StockX leaders to talk all about the StockX evolution and what it’s like being a part of one the fastest growing startups in Detroit — and the world.

Stephen Winn was the 6th hire at StockX. A Michigan-native, Stephen watched a lot of his classmates from the University of Michigan graduate and move to Chicago, New York or San Francisco. 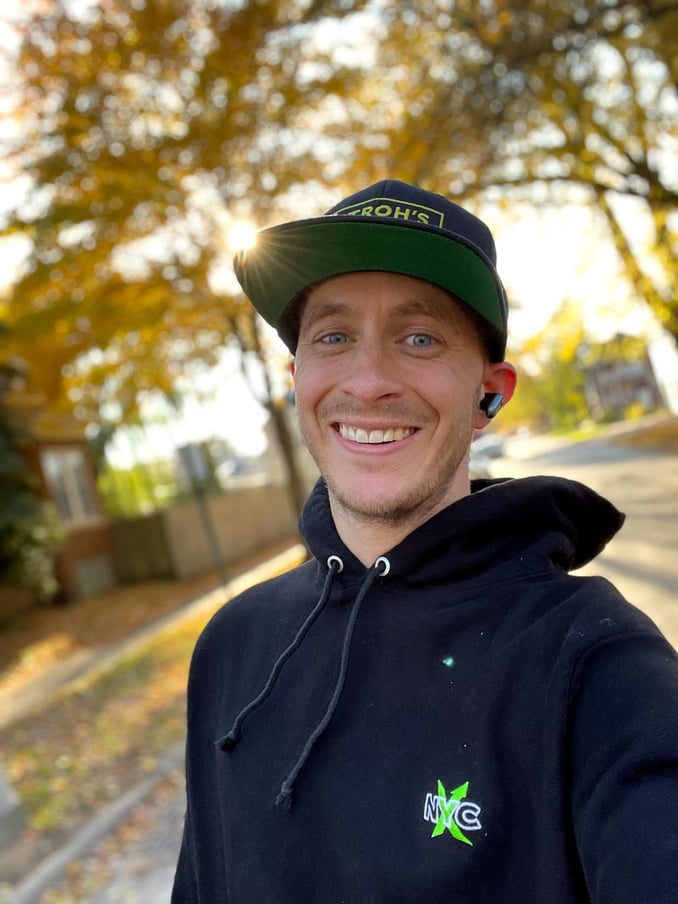 “Detroit is a really special place,” Stephen says. “It has such an interesting history and has really been positioned as an underdog. Detroit leaves you with a little bit of edge, something to prove, more fully loaded. StockX found a lot of people with that mentality.”

Over the last 7 years, Stephen has been growing the StockX technology team. Now, as the Chief Product Officer, he’s focused on taking StockX to the next level.

Though not a Detroit native, Shervin Moghaddam, Vice President of Strategy at StockX, says Detroit is like a second hometown. “I love meeting people from Detroit. The food scene, the architecture, the fun downtown… it’s great,” says Shervin, who now lives in the Bay Area after growing up in the U.K.

Shervin, who has been in the tech space for about 20 years and led teams at eBay, says he’s always been interested in the positive impact businesses can have.

For StockX, that means solving real problems for buyers and sellers.

At its core, StockX is a digital marketplace for buying and selling the world’s most coveted items. It started with sneakers but has grown into so much more: collectibles, watches, apparel, trading cards, electronics, and more.

Stephen wasn’t a sneakerhead when he started at the company, but he says it was easy to fall in love with the products.

“There’s a story behind every collectible item,” Stephen says. “It’s a really exciting opportunity to engage with this community, the products, in a way that would be different if you were selling mass-produced consumer goods. It’s a really cool community with a ton of passion and engagement.” 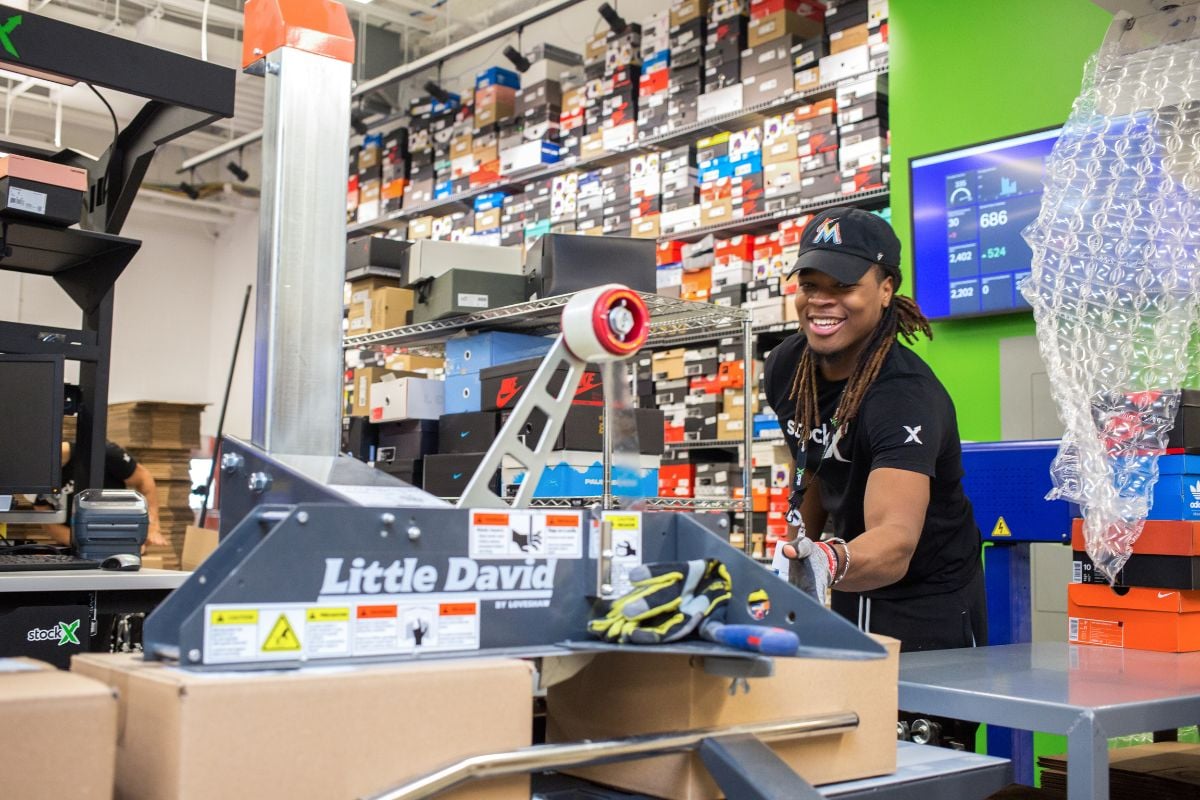 For Shervin — who loves Lego sets, sneakers, and clothes — working at StockX has been fun and rewarding.

“I feel like a big kid,” he says. “All these things I love that I get to bring to life. So many people at StockX have a passion for it, and it’s great to see how much people really love what they do.”

Sure you can get collectibles on other online marketplaces, but what makes StockX extra unique is its authentication process.

StockX authenticates every item sold on the site. That means they sit in the middle of every single transaction.

“This really gives both the buyer and seller a peace of mind,” Shervin says. “Plus, the anonymous yet authenticated nature of the marketplace really helps build trust.”

Shervin compares it to the stock market. When you buy stocks, you’re not directly interacting with the individuals selling them.

In addition to creating efficient, trustworthy transactions, StockX is all online and works to ensure a fast delivery. While the pandemic did complicate the physical delivery of goods, it also drove a lot of people to shop online.

Building technology solutions that solve for trust, global complexity, logistics and more, has been a rewarding project to work on, Stephen says.

While the tech stack is a relatively common set of tools (Kubernetes, Slack, Github, etc.), there isn't a common toolkit out there for what StockX is doing: enabling commerce between buyers and sellers across more than 200 countries and territories. The engineering team is tackling those problems, creating solutions to efficiently match and deliver trades all around the world.

“The development team is so close to the customer experience,” says Stephen. “The decisions we make in our role really impact the business.”

From creating an account to securely logging in, making a purchase to getting your product on time, trust and efficiency are at the heart of StockX technology. And as the company continues to grow, so does the opportunity for the dev team to make an impact. 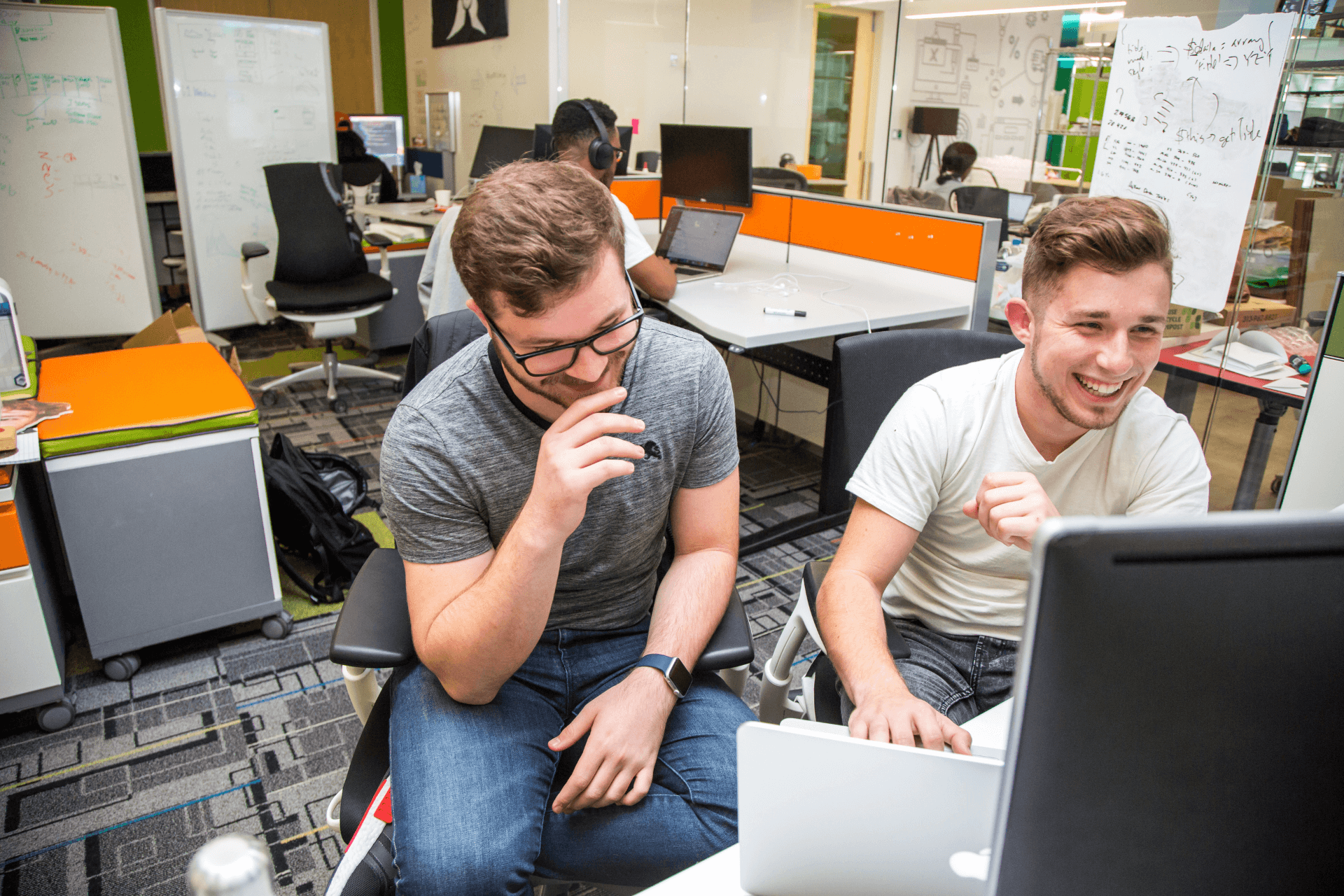 “You have an opportunity to influence the future state of the organization, what the culture will become, what the organization structure and processes will be,” Stephen says. “StockX engineers have huge opportunities to adopt leading edge technologies. Our dev team takes a lot of pride in moving this monolithic platform we built back in 2015 into the microservice environment that we aspire to and are growing into today, and making it work at a global scale.”

Stephen says that the things built in 2015 don’t pass the stress tests of 2022. But that’s just a unique opportunity for the team to rebuild, constantly improve, and continue to grow.

“Engineers at StockX can really plant a flag and make an impact on the StockX 2.0 platform,” says Stephen.

Playing on the Dream Team

Culture can be hard to describe or define, but for both Stephen and Shervin, it’s all about the people.

“The culture at StockX is really something,” says Stephen.

From both a product perspective and an organizational one, StockX is all about providing access.

“We don’t try to have a strong opinion of what is “cool” or not cool, of what you should or shouldn’t buy,” Shervin says. “And as a team, we never want to be exclusive or create barriers. It’s not about speaking the language or being members of the club. It’s about accessing the things you love, new ideas, and opportunities to grow.”

That’s what playing on the “Dream Team” is all about — supporting one another and helping both the company and its people grow. Here’s how they do it:

Stephen notes that there’s still a lot of ambiguity as the company continues to grow. Employees have to be flexible and able to adapt quickly to changes.

2. People enjoy a lot of autonomy

“Personal responsibility is very important to us,” Stephen says. What you’re working on impacts the business, the organization, the customers, and the sellers.

Shervin notes that the team is both entrepreneurial and collaborative. When people come together, big things happen. 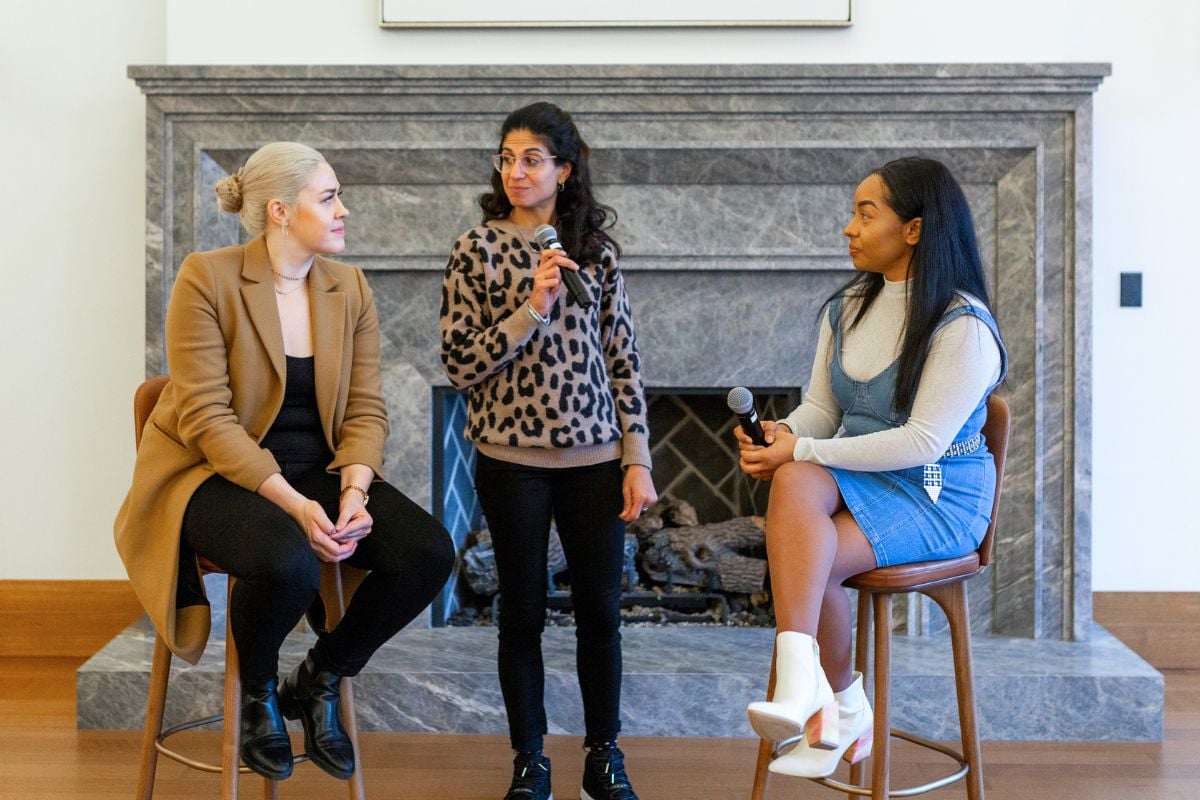 3. There’s a sense of urgency around delivery and execution

It’s all about being hungry for what’s next. The team is committed to learning, growing and disrupting. It’s about pushing yourself and your team against the status quo — and not being afraid to make mistakes. Stephen says it’s often not about “if” but about “when.”

4. The people are everything — it’s all about playing on the Dream Team

“I love being on this team,” Stephen says. “This whole thing has been my favorite project.”

Shervin also calls out how much he loves being a part of the team.

“I love the people on this team. Everyone is open to new ideas and to each other. We’re straightforward with each other, and everyone is humble. We love working hard and having fun. We are proud of and celebrate our success, but no one thinks they’re a big shot,” says Shervin. “We all support each other and empower everyone to continue to grow.”

And that’s what’s really at the heart of it: empowerment.

“When people come to StockX, they’re not making an everyday purchase. They’re looking for a memorable gift, finding a collectible they’ve been hunting for, or shopping for something that brings them joy,” Shervin said. “It’s a joyous experience, and we get to be a part of that.”

If you want to be a part of the team disrupting the way people consume and trade current culture, check out open jobs at StockX and apply now.