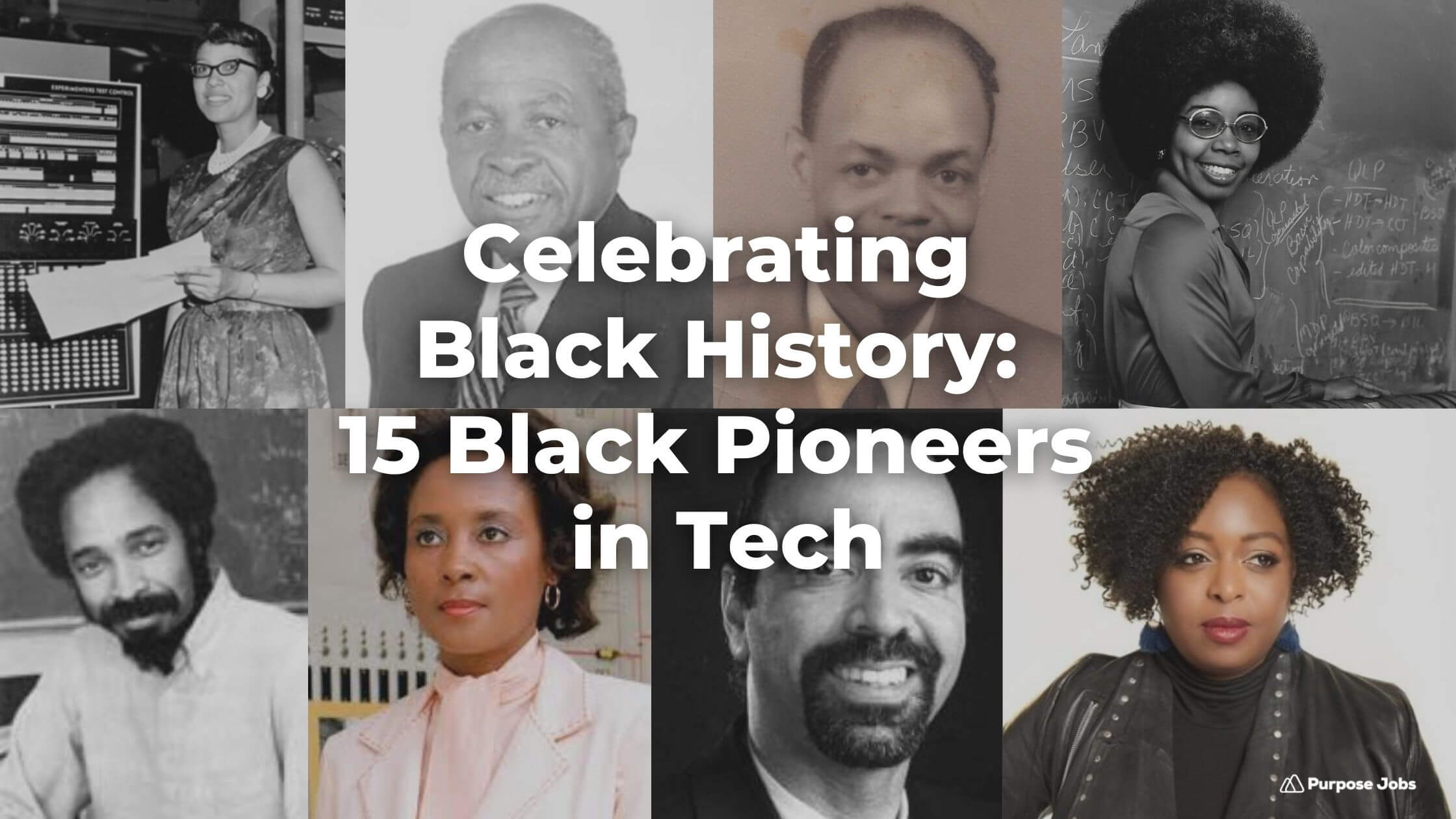 There are many ways to celebrate Black History Month. Learning about amazing Black figures in American history. Discussing solutions to problems in diversity, equity and inclusion at the office. Reading stories written by great Black authors. The list goes on.

One thing we wanted to do at Purpose Jobs was highlight the contributions Black folks have made in the tech industry. We all know the story of Steve Jobs and Bill Gates. You might know the story of Katherine Johnson if you saw the movie Hidden Figures. But do you know the story of Valerie Thomas? Or Mark Dean?

In honor of Black History Month, we’re highlighting some of the most influential Black leaders in tech from history—and a few from today. Did we miss someone? Let us know! We love learning more about tech and the people that have made the industry what it is today.

15 Black Leaders in Tech You Should Know

Born in Columbus, Ohio, Granville Woods was a great inventor, specifically known for his 15 different appliances for the electric railways. He was most known for inventing the multiplex “induction telegraph,” which allowed for voice communication through telegraph wires. The device ended up preventing many train accidents. He became known as “Black Edison” because Thomas Edison tried to sue Woods after he invented the multiplex telegraph. The lawsuit failed, so Edison tried to make Woods a partner, but he refused. Woods held nearly 60 patents at the time of his death.

The accomplishments of Katherine Johnson were highlighted in the film Hidden Figures, but for those who don’t know, she was a pioneering Black woman in tech. She entered college when she was just 15, and at the time of graduation, her only employment options were teaching or nursing. So she worked as a teacher before she applied for a job at the Langley Research Center (which would later become part of NASA). In 1953, Johnson began working as a “human computer” and calculated the flight path for the first NASA mission to space. Her calculations were essential to the success of many early missions, like Project Mercury and Apollo 11. She also helped confirm the accuracy when machine computers were brought in. In 2015, she was awarded the Presidential Medal of Freedom by President Obama.

Otis Boykin was another prolific inventor, eventually holding 26 patents. After graduating from Fisk College in 1941, he began working with the Majestic Radio and TV Corporation and eventually P.J. Nilsen Research Laboratories. Among his inventions were a wire precision resistor used in televisions, radios, IBM computers, and even in military missiles. He also invented a control unit for the pacemaker. Boykin helped improve and make everyday electronics more efficient and affordable.

In 1949, Evelyn Boyd Granville became the second African-American woman ever to earn a Ph.D. in mathematics (hers was from Yale). After working in D.C. using math to help develop missile fuses, Granville took on a role at IBM in 1956. This launched her career at NASA, since IBM was a contractor to NASA at the time. She was an instrumental part of the Project Mercury missions, designing computer software that helped analyze satellite orbits. She also worked on the Apollo program in 1962 before returning to IBM as a senior mathematician. She has had a passion for education, teaching in higher ed, elementary schools, and advocating for STEM education.

Like Katherine Johnson, Melba Roy Mouton was another great Black leader in tech for her important work as a “human computer” at NASA. She eventually made her way to being Head of Computer Programming at NASA, and then took on a role as Program Production Section Chief at Goddard Space Flight Center. Her work helped produce the orbital element timetables which allowed millions to see the satellite from Earth as it passed overhead. She received an Apollo Achievement Award and an Exceptional Performance Award while at NASA. 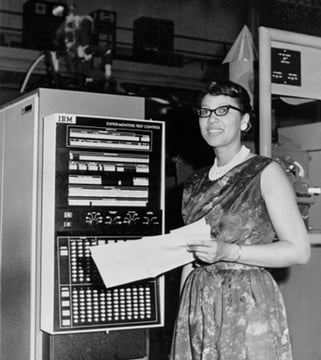 Roy Clay Sr. is often referred to as the “Godfather of Silicon Valley.” After graduating from Saint Louis University (where he was one of the first Black men to attend), he started working in computer programming. This was back in the ‘50s, when computers took up an entire room. He worked on writing software that demonstrated the spread of radiation after an atomic explosion. In the ‘70s, Clay worked as a computer consultant in Silicon Valley and became a key figure in the development of HP’s computer divisions. He would eventually lead the team that engineered HP’s entrance into the computer market. In 2003, he was inducted into the Silicon Valley Engineering Council’s Hall of Fame.

Annie J Easley was another Black NASA scientist and important Black leader in tech. When she began her career, she was only one of four Black employees (out of 2,500) at the National Advisory Committee for Aeronautics (NACA), which was the precursor to NASA. She started as a human computer, but when the real machine computers came out, she dove into learning assembly language and FORTRAN. She became a computer programmer, working on a variety of projects. But her most famous work was on the Centaur rocket, a first-of-its-kind rocket that used a unique fuel system. Its legacy still endures today. She had a long career with NASA, working on extremely advanced technology while overcoming Jim Crow laws and discrimination.

Frank Greene is often hailed as one of the “first Black technologists.” He developed high-speed semiconductor computer-memory systems in the 1960s at Fairchild Semiconductor R&D Labs. He would later go on to start two technology companies of his own. He also founded a VC firm called NewVista Capital, which focused on minority and female-led companies. His legacy as a technologist and an investor lives on today, and he’s also among 63 inductees in the Silicon Valley Engineering Council’s Hall of Fame.

Valerie Thomas had a strong interest in technology early on but didn’t receive support for it until she attended Morgan State University. She was one of only two women in her class to major in physics. She excelled at school and landed a job as a mathematical/data analyst for NASA. She worked at NASA from 1964 to 1995, conducting large-scale experiments, developing computer data systems, and most notably, spearheading the development of the first satellite to send images from space, “Landsat.” The technology she developed is still used by NASA today.

A native of Chicago, Clarence “Skip” Ellis was the first African-American to earn a Ph.D. in computer science (he earned this degree from University of Illinois at Urbana-Champaign in 1969). While studying, Ellis worked on hardware, software, and the development of ILLIAC IV supercomputer. He had a long career at major tech companies like Bell Telephone Laboratories, IBM, Xerox, and more. At the Palo Alto Research Center where he worked from 1976 to 1984, Ellis spearheaded a group that invented Officetalk. It was the first office system to use icons and ethernet to allow people to collaborate from a distance. Ellis was a real pioneer in this field of operational transformation (examining the functionality in collaborative systems), which is found in computer applications today like Google Docs. Does that make him the grandfather (maybe great grandfather) of remote work? Perhaps. But either way, Ellis has had a hand in shaping the technology we use today.

John W. Thompson has had an impressive career in tech. He began as a salesperson at IBM and climbed up in the company to become the general manager of IBM Americas. He has also served as the CEO of Virtual Instruments, CEO of Symantec, and today he serves as the Chairman of Microsoft (since 2014). He’s also made significant contributions to investing in the next generation of tech.

For the graphics in Jurassic Park, Aladdin, Beauty and the Beast, and more, we have Chicago native Marc Regis Hannah to thank. He was an electrical engineer and computer graphics designer in the ‘80s and ‘90s. In 1982 he co-founded Silicon Graphics, Inc., eventually becoming the company’s principal scientist. His computer graphics technology has been used in major motion films as well as commercials, the intro for Monday Night Football, and by George Lucas’s visual effects studio, Industrial Light & Magic.

Mark Dean is an influential Black tech leader and prominent figure in computer science. Early on he had an interest—and a gift—in technology, building his own computer, radio and amplifier when he was in high school. He began working at IBM in 1980, where he was an essential leader in developing the personal computer. He holds 3 of IBM's original 9 patents for the PC. Beyond that, he holds a total of 20 patents. Throughout his career he has made significant contributions to IBM’s research and development. More recently, he led the team that produced the 1-Gigahertz chip. He is the first African-American to become an IBM Fellow, which represents the highest level of technical excellence.

John Henry Thompson has used his background in computer science and visual arts to help bridge the early gap between technology and art. He is the inventor of Lingo, a scripting language that renders visuals in computer programs. Many programs that use graphics, animation, sound, and video for interactive simulations still use Lingo to this day. It’s also been used to create the programs that are now used in video games, web design, animation and graphics.

Kimberly Bryant is an electrical engineer and activist whose career has had a wide-ranging impact. She’s spent over 20 years in the pharmaceutical and biotech industries, and she’s also a champion for diversity and inclusion in tech. She’s the Founder and Executive Director of Black Girls CODE, a program dedicated to introducing girls of color to the tech industry by teaching computer programming to school-age girls. Their goal is to teach one million black girls to code by 2040. She is one of the most influential engineers in her career and her advocacy, and she was recognized as a White House Champion of Change for Tech Inclusion in 2013.

Candidates Should Ask These 6 Questions About Diversity and Inclusion

Keep That Same Energy: What We Learned at the Diversity and Inclusion Panel