Here’s what you need to know about Detroit Homecoming 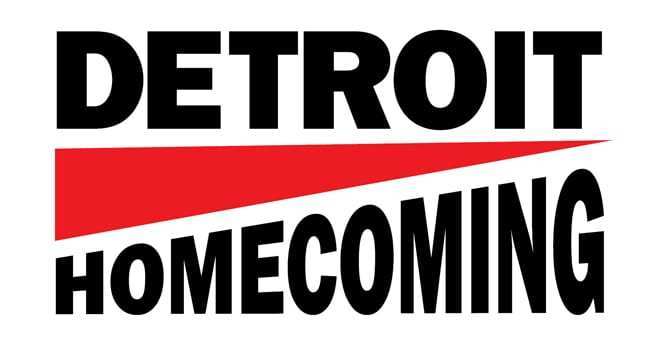 Mary Kramer is the co-founder of Detroit Homecoming, a three-day, invite-only event where Detroit expats return to the city, get inspired, and imagine new ways to rebuild and reinvest in the city that made them.

We were lucky enough to catch up with Mary to learn more about the story behind the event.

This year Detroit Homecoming is taking place from September 12–14th. Attendees will meet some of the city’s most dynamic entrepreneurs and leaders. They’ll have dinner on the floor of Little Caesars Arena, venture to the new Lexus Velodrome, and more.

Though the event is invite-only, you can stream the event live each day at crainsdetroit.com or detroithomecoming.com at the following times:

According to Mary, more than 500 expats have made the voyage trip home since the event’s first run in 2014, and more than $300 million in expat investments can be tracked. Read ahead to discover what else Mary had to say about this one-of-a-kind event. 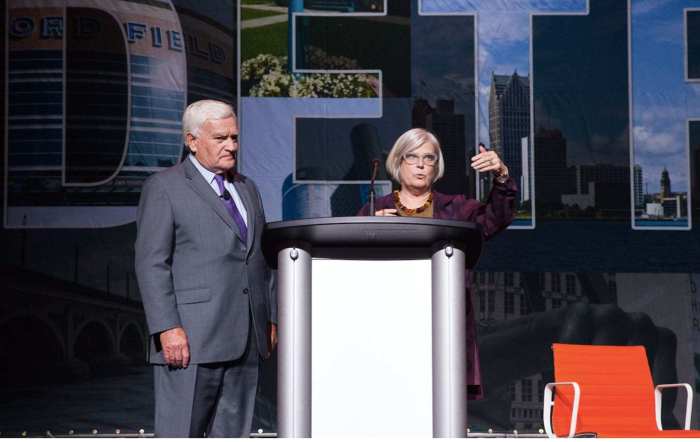 Meet Mary. Here she is speaking at Detroit Homecoming IV next to co-founder Jim Hayes.

Tell us a little more about who you are, and your role in co-founding Detroit Homecoming.

“I’m a group publisher for Crain Communications. In 2013, I met a friend of Keith Crain’s named Jim Hayes, and he brought to Keith an idea. Keith and Jim were friends from years ago when Jim was working in the Detroit area for Sports Illustrated, and then went on to a career in New York as publisher of Fortune Magazine, so someone from the publishing industry, now retired, who had an amazing idea for Detroit as it was entering bankruptcy.”

“The idea was very simple. What if you could create an initiative that would bring people back to see what was going on in Detroit, to see for themselves what was going on? Detroit would need new investments, not just in real estate, but new investments in philanthropy, new investments in companies bringing operations here to add jobs. What if you could create an initiative that would actually be a catalyst for that kind of activity? Keith and Jim and I talked about it, and we decided in September of 2013 that we thought we could pull it off, and we planned the inaugural Detroit Homecoming to occur in September of 2014. Since then, we’ve hosted more than 500 invitation-only expats at our event.”

Take us back to 2013 when the city had filed for bankruptcy. What was the general mood in the city?

“I think at the time of the bankruptcy, inside of the city, there was a lot of uncertainty, but there was also a lot of excitement, because people in business really thought that the bankruptcy would be an opportunity for the city to reset itself. At the time, so much of the city budget was going to legacy costs, and they weren’t able to invest in the current residents, the current employees, and in staffing police appropriately, because they were spending so much on pension costs and healthcare costs for retirees.”

“The debt level for the city of Detroit was enormous, so part of going through bankruptcy was reducing the legacy costs that they had. Yes, the retirees did take a hit on their pensions, but it wasn’t as severe as many private sector companies whose pension funds go aground. There was a hit, but it wasn’t as bad as what people had originally anticipated, in part because philanthropy came through and created the Grand Bargain to create an $850 million fund that the proceeds of which would help pay for retiree healthcare premiums. That was a huge win for the city of Detroit”

“Outside the city, people were thinking, ‘Oh, the city’s in bankruptcy, my city that I love. I love the Red Wings, I love the Tigers, I loved growing up in Metro Detroit.’ The homecoming gives them a chance to come learn a little bit more about what’s really going on here. Even in that first year, there was buzz and excitement about the opportunities in the city.”

“That’s what I think is special about it. We’re not hitting people over the head and saying, ‘Hey, you have to do this!’ We’re giving them the kinds of experiences that could inspire them. They’re smart people, these are successful people; they can figure out how they can plug in. The beauty is watching and helping people make the kind of connections that can support their own way of reinvesting in the city or recommitting to the city.”

What kind of outcomes have you seen from this initiative?

“To date, we’re tracking over $300 million in closed or planned investments and philanthropic pledges. This year, about 40% of the registered attendees have attended at least one prior Homecoming. Here’s the deal, and this is how we can track the outcomes: in order to be invited back, you have to document for us what you have done to benefit Detroit as a result of coming to homecoming.”

How has the homecoming evolved since its inception in 2014?

“I think the story in 2014 was, ‘The city’s in bankruptcy and needs your help.’ Now, the theme is, ‘Look at the transformation that’s happened just in five years. Here’s how you can plug in and support a neighborhood business, mentor a neighborhood entrepreneur, or help a part of the city that hasn’t risen like Midtown and Downtown have.”

“This year we’ve got almost 50 local entrepreneurs coming to the event. We’ll have a set-up where the entrepreneurs can say, ‘Here’s my pain point, here’s what I need help and advice on,’ and then we’ll match expats with entrepreneurs based on expertise and need. What we try to do is make connections. The focus this year is on neighborhoods and education.”

Why are you personally invested in the success of these events?

“I’ve lived in the city of Detroit since I took this job at Crain’s in 1989. I’ve watched the city, I’ve participated in nonprofits in the city. I love the city, so when Jim Hayes brought this idea, I saw immediately this could be such a powerful thing for Detroit. I feel it’s like a purpose-driven, mission-driven engagement for me, and I can see the outcomes.”

How can current residents of Detroit get involved in Detroit Homecoming?

“Nominate an expat to join us at next year’s event! Who do you know who qualifies as an expat? Send us their name, send us their title, tell us where they are. Who should be coming to this? Who could actually bring an office or a business here? Who could help make a difference?”

Subscribe to the re:purpose blog to stay up-to-date on: